Some restaurants in Bangkok combine the gracefulness of a Parisian setting and the exotic style of a modern Eastern eatery. With the large tiled marble floors and the sharp finishing contrasted with the alternating colours of a rustic décor, half the hunger can be satisfied from just looking around. Large ceiling lamps dangle down, with a yellow luminescence which likens them to pearls. Simple but elegant caned chairs await the diner, with pristine white table cloths laid below patterned water glasses which just invite for a seat, as an invitation to a brunch. This month HOT Magazine has the pleasure to review the Oriental Residence’s Café Claire.

Our team was warmly greeted by the manager and taken to one of the sofa seats, the dark coloration of which strikes a sharp contrast to the rest of the table setting. There to greet us was an attentive waitress who made sure everything was in order.

To refresh the palate came first a classic house cocktail: the Kiwi Wireless. Named after Wireless Road on which the restaurant sits, the drink possessed citrusy notes and a very defined tropical taste which set the night off on an oriental style, a perfect mesh for what was to come later on. 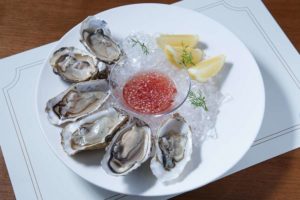 It wasn’t long before the first dish of the night was served at the table. Making their way were six luscious Fine de Claire oysters with vinaigrette. The freshness of this dish was palpable. Oysters in particular can be deceiving should they not possess the utmost quality, and these certainly did. The chunks of onion gave an earthy touch to the acidity of the vinaigrette, which balanced the meal to perfection.

The next dish to make its way to the table was their Escargot de Bourgogne a l’ ai, which again was a risky one. Not only is this one of the few restaurants where these notoriously delicious French delicacies are served, but it makes them quite magnificently. An escargot which lacks taste can essentially mount to being an unpleasant experience, but Café Claire has that one under control. The roasted aroma and the fine balance of flavours made of it a fantastic dish. 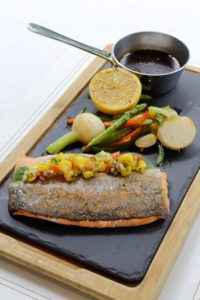 We were subsequently treated to Truite Grenobloise, a Chiang Mai Trout pan fried, brown butter sauce with capers, lemon, parsley and lemon juice, a marvellously prepared dish. Aromatic and filling the palate with A salty zest which brought out the character of the Maniere with caper sauce.

The next dish was the salmon Tarter which showed us a different side of the fish’s goodness. Tender and juicy, it was very well contrasted by the citrusy hit of the berry compote. 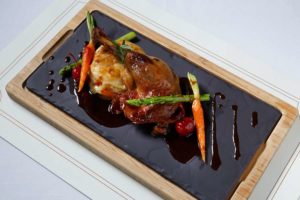 We briefly moved away from the sea, and back on dry land awaited the Cuisse de canard confit – Deuck leg confit served with Dauphinois potatoes which contended very intensely with the previous two dishes. Cooked to perfection and boasting of that crispy outer coat, it led the tooth into a surprise tenderness upon the first bite. Contrasted with the asparagus it really presented a perfect combination. 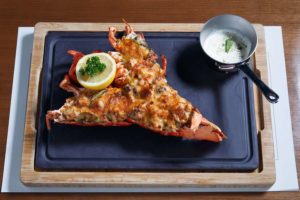 Back in the sea – and in what a way – came the grandiosity of the Maine Lobster. This by far outweighed other dishes, with a striking presentation which dwarfed the large plate on which it

was served. Notes of cheese struck familiar as the cream contrasted with the undeniable quality of the lobster. Mushrooms and assorted vegetables balanced the rest of the dish, a fantastic contrast to what was a signature meal which can be prepared any way you like.

Round about this time, came the Berry Mojito, which helped us transition into the dessert with the deep taste of its fruity redness. 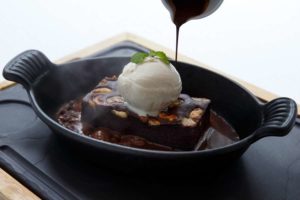 The dessert highlight though was without a doubt the Hot fudge brownie served with vanilla ice cream. The richness of the brownie and the chocolatey load of the sauce on the sizzling platter was

a visual spectacle on its own, cooled down by the rich vanilla ice cream.

All in all, Café Claire is definitely a place worth exploring. If you’re tempted by simple yet striking decoration and appreciate the higher spheres of French cuisine, this little bistro on Bangkok’s Wireless Road will have you going oh là là!