When it comes to choosing paradise on earth, one thinks of several places but top of your list should definitely be the island of Palawan in the Philippines. Travel and Leisure magazine honored Palawan the title of the “World’s Best Island” for the third time in three years—and who can blame them? From its perfectly placed palms trees to the lush blue seas that splash against the thousands of islands, Palawan has all the perfect vibes that you thought only existed in well, paradise.

Palawan can refer to the island of Palawan, or the wider province of Palawan for which the island is named. The islands of Palawan are located on the western side of the Philippines, close to the north of Malaysia. 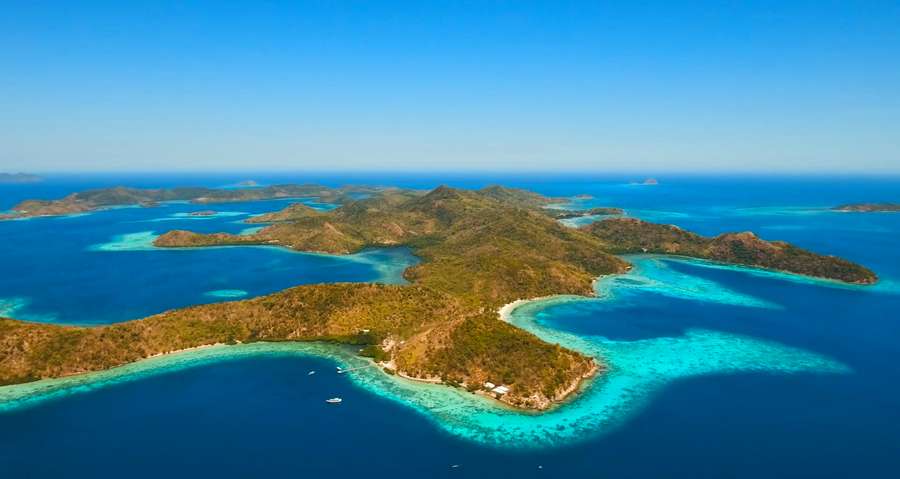 Palawan has a colorful history, starting from its name. The Chinese named it as “Pa-La-Yu” which means “land of beautiful harbors.” The Indian called it “Palaws” which meant “territory.” The natives of the Palawan Island named it after a plant which was called “Palwar” and the Spanish referred to it as “Paragua” which means umbrella, due to its shape. Over the centuries, the different names it got from different groups of people have converged into one name: Palawan, a name which connotes paradise for the many people who hear of its amazing natural wonders. Yet, in comparison to world-famous Boracay, Palawan is a bit isolated from the main clustering of islands that make up the Philippines. Being that it takes some time to get there; many travelers leave it off their itinerary. However, with its gorgeous karst limestone geography, pristine beaches, dramatic cliffs and hidden lagoons, Palawan has no shortage of things to do and see. 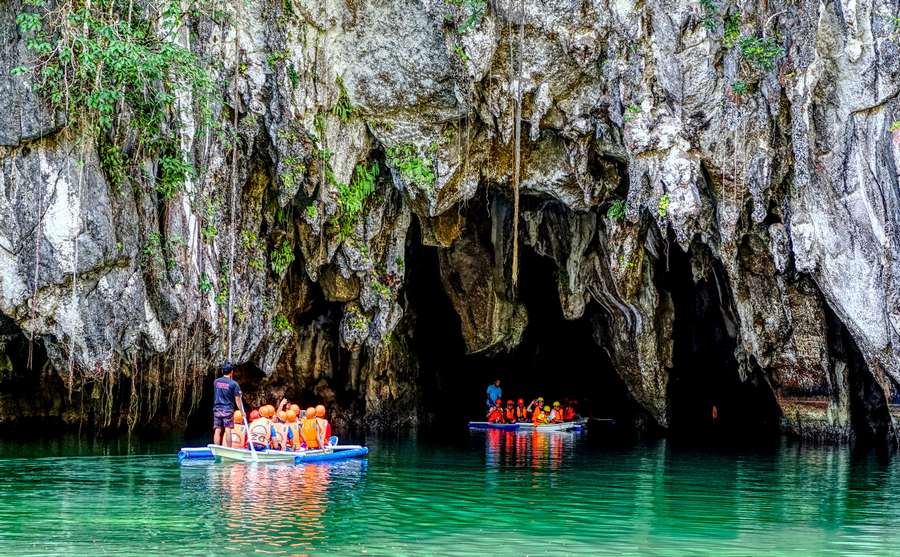 Puerto Princesa is the capital of Palawan and the most accessible location on the island. For that reason, many people choose to start their trip there and then make their way up north. Most people stay here for a night or so, mainly to visit the Puerto Princesa Subterranean River National Park. A UNESCO World Heritage Site, the cave complex is one of the new seven wonders of nature and contains the second longest underground river in the world. Along with the Puerto Princesa Underground River, Tubbataha Reef is another UNESCO World Heritage Site, renowned as host to one of the highest biodiversity of marine life in the world. Next stop would be Port Barton, a sleepy little beach town. Although not as popular as the rest of Palawan, Port Barton is the only place in the province where you can swim with sea turtles. Island hopping is popular here, each island offering amazing snorkeling spots and incredible hiking trails. 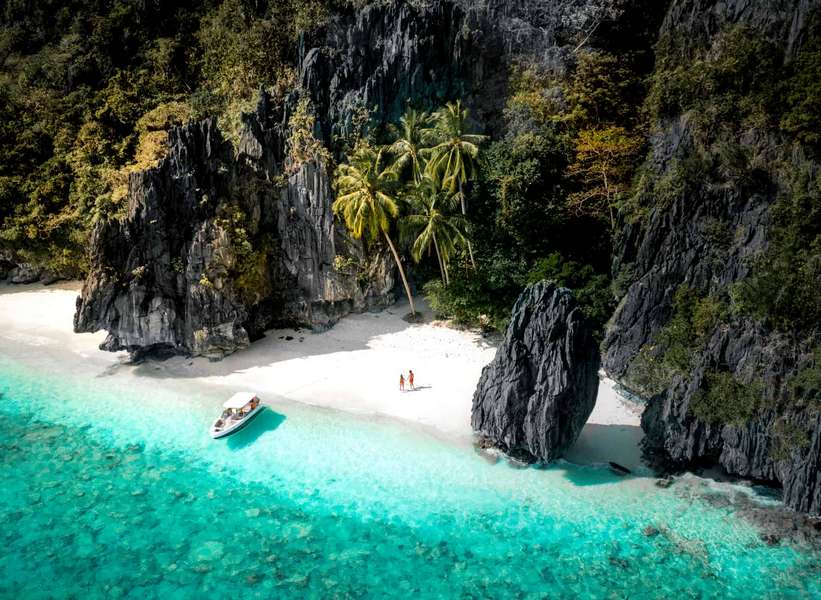 El Nido is the pinnacle of every Palawan vacation, and that’s mostly thanks to the beautiful islands surrounding it. Located on the northernmost tip of mainland Palawan, towering karst mountains serve as the perfect backdrop for adventures in El Nido. El Nido is the primary base for exploring Palawan’s star attraction, the stunning Bacuit Archipelago. Tiny swiftlets build edible nests out of saliva in the immense limestone cliffs that surround the ramshackle town proper – hence the name, El Nido (nest in Spanish). Out of the many places to visit in El Nido, Duli Beach should be high on your list. 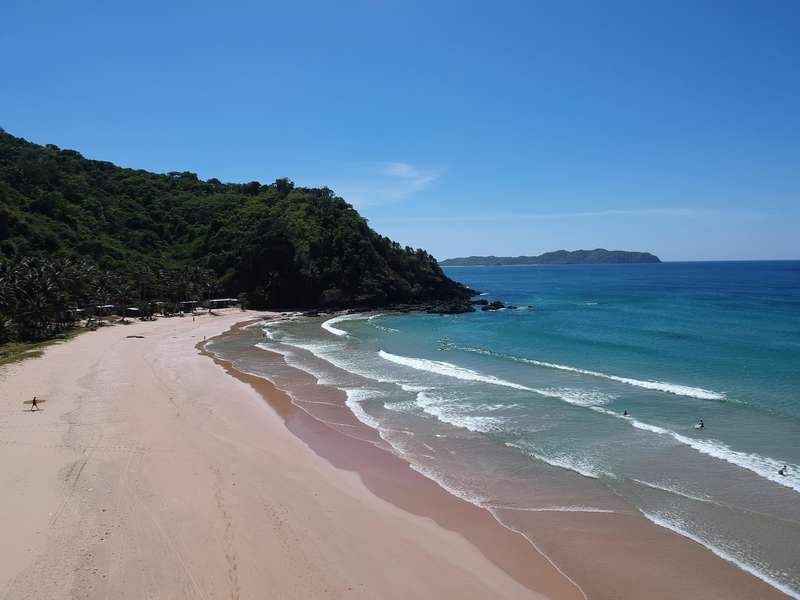 This incredibly beautiful, jungle-backed, stretch of golden sand is the center of El Nido’s surfing community. Cadlao Island looms overhead. Home to the lovely Cadlao Lagoon (also known as Ubugun Cave), the lagoon offers some good snorkeling in the shallow coral gardens that lie off the beach at the head of the bay. Miniloc Island is perhaps the most interesting of the archipelago’s islands. The main attractions are Big Lagoon, Small Lagoon and Secret Lagoon, three of the more photographed sights in all of Palawan. 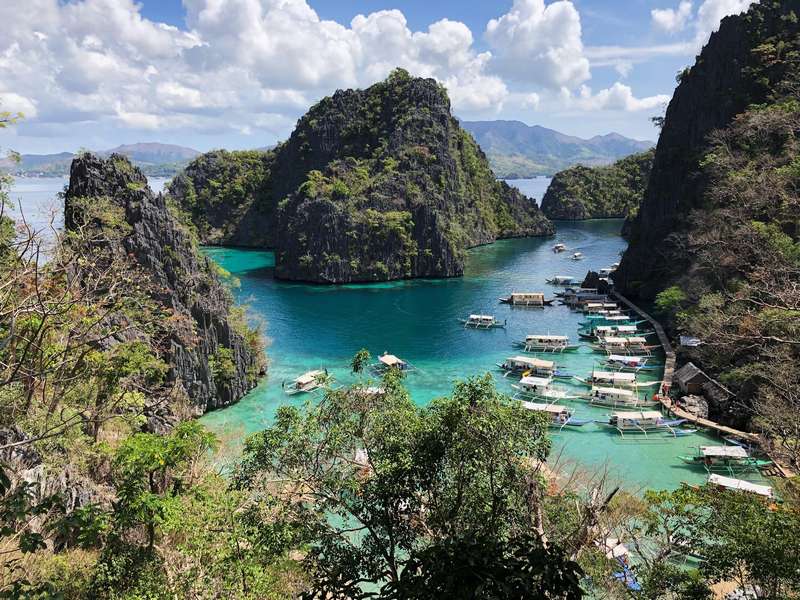 Coron is just as beautiful as El Nido but just as El Nido’s sandy beaches claim your attention, Coron’s underwater views will stun you. Confusingly, the island of Coron is not on the same island as Coron town but you’ll get used to island hopping here. Of particular interest to wreck and nature divers is Coron Bay, where you can have the unique experience of seeing the wrecks of sunken World War 2 ships that were taken out in the bay in 1944. These wrecks range in depth from 10 feet to as deep as 140 feet, with an average depth of 60-80 feet. Motorized outrigger boats called banca’s take divers from Busuanga Island to the wrecks, which are clustered surprisingly close together: you can spend several days just picking your way through the shipwrecks and dodging the considerable marine life in the area, including yellowfin tuna, groupers, scorpionfish and sea turtles. Apart from that, Kayangan Lake is definitely worth a visit—it was awarded the Cleanest Inland Body of Water in the Philippines—and so is the famous sandy white Calachuchi Beach where a secret lagoon can be viewed on the view deck of the island. Speaking of lagoons, it’s not Coron until you’ve seen the Twin Lagoons. The Twin Lagoon is what it sounds like – a pair of dazzling blue lagoons set amongst a backdrop of vertical, black, jagged karst walls on Coron Island. These jagged cliffs separate the two lagoons and protect them from the currents and tides, making the water clear and calm. 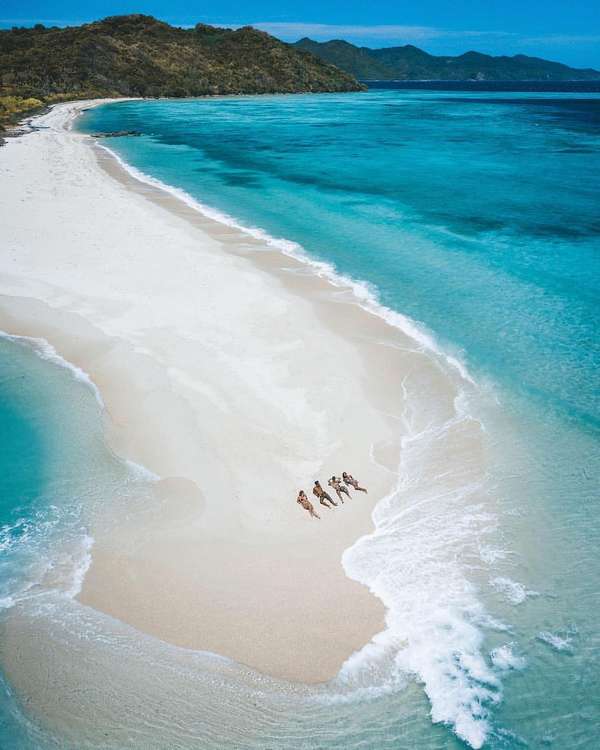 Spread across the waters between El Nido and Coron are the islands of Linapacan. During the 16th century the Spanish sent missionaries to the Philippines, including one to Linapacan. When they landed on shore, they saw footprints, traced them and eventually came to a hut where a beautiful woman resided. She replied that her name was Pacan and they later discovered that she was the wife of the island’s chieftain. They thus named the island Reina Pacan, in honor of the beautiful queen, but which much later was renamed to Linapacan. The main district of Linapacan is San Miguel where the ferries stop. Aside from the crystal clear water, there are the million years old Seniora caves, an old Spanish fortress, cliff diving straight into the ocean, and even jungle trails for avid hikers. There are also two shipwrecks, but the local diving services are not yet fully developed. 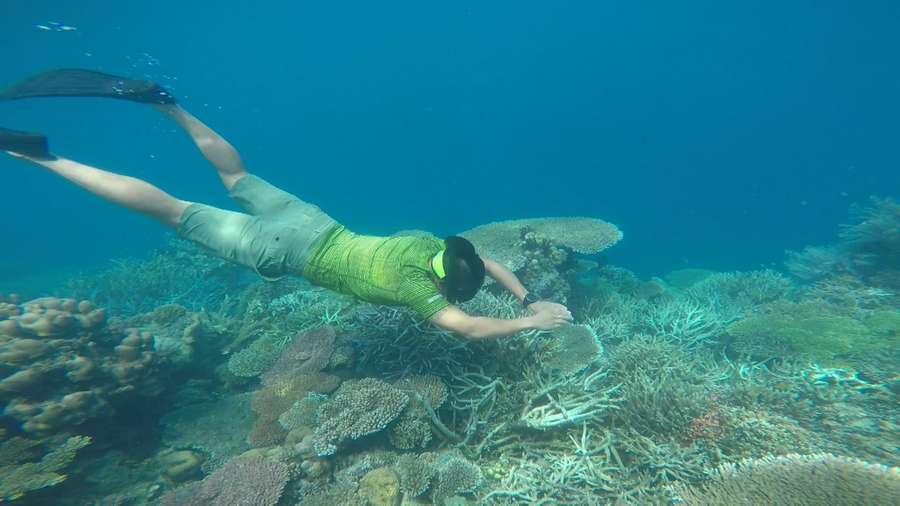 If playing castaway on a private island in the Philippines is on your bucket list, look no further than Taytay, a small island that’s just off the coast of northeast Palawan. Away from the crowds of El Nido, the island provides quiet, solitude and a back-to-nature approach to island life in the Philippines. Taytay was once the capital of Palawan during the Spanish colonial occupation, and although there’s not much to do in the town itself, it’s a useful jumping off point for island exploration. Taytay is also home to the Kuyawyaw Falls, a series of three falls cascading into fresh pools.

Cuyo is the largest island of the Cuyo Archipelago with the biggest population and is situated in between Palawan and Panay. The oldest town in Palawan, Cuyo is full of rich culture which has evolved from both native and Spanish influences. Cuyo is perfect for those looking to relax on the white sandy beaches, take a dip in the crystal clear waters, eat tasty Filipino food, and interact with the locals who believe in a simple, carefree life. For the adrenaline junkies out there, Cuyo is an awesome place to learn kite surfing.

Swimming and relaxing on the beach are great, but watch out for the sea urchins! One of the most popular attractions of Cuyo is St Augustine’s Church which was constructed by the Spanish missionaries in the 17th century. Don’t forget about Mt. Aguado where you’ll get 360 degree views of the island. 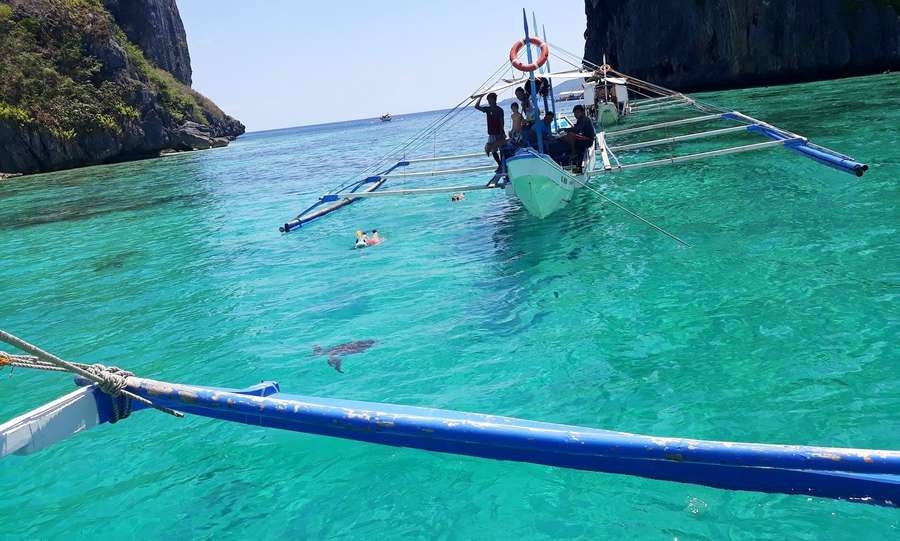 Many places claim to be ‘off-the-beaten-track’ but Rizal, on Palawan’s south-west coast, really fits the bill. With many uninhabited beach coves lining the coastline, you’ll no doubt find a secluded spot to enjoy the unspoiled white sandy beaches, calm azure waters and some genuine peace and quiet – you’ll likely be the only tourist for miles. Similarly, Balabac is a group of islands in the southernmost tip of Palawan. It is so far south that Sabah in East Malaysia is nearer to Balabac than Puerto Princesa. Although it was once an off-beat location, it’s becoming a more popular destination due to its pristine islands and sand bars. There’s Onuk Island, a private island with white sand, blue water and where you can freedive to see giant clams and turtles. Then, there’s Candaraman island, another great beach which has an area called “starfish alley” where you can take pictures with literally dozens of starfishes. 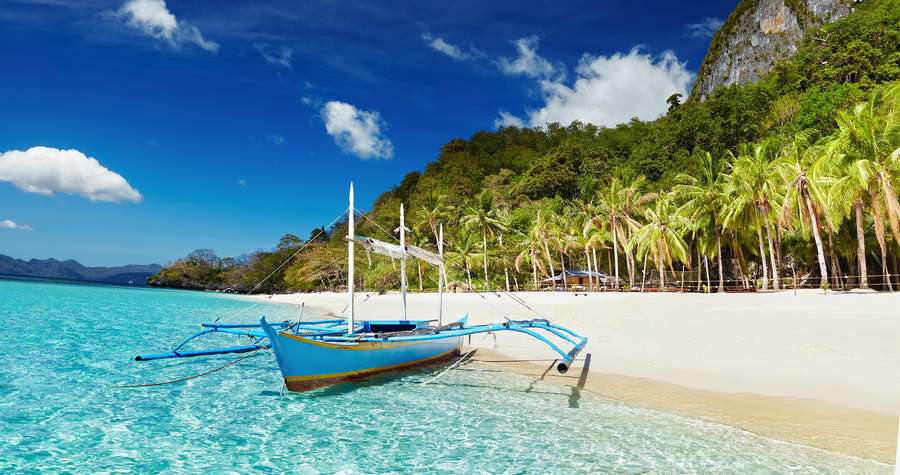 Palawan is easily accessible by flight into Puerto Princesa from the capital Manila or from other domestic airports such as Cebu, Caticlan (Boracay) with Cebu Pacific or Philippine Airlines. It is possible to fly direct to El Nido from Manila and Cebu but the flights are currently just 4 times a week and more expensive. The drive to El Nido from the airport at Puerto Princesa is quite long at 5 hours. There are also ferries from Manila into the ports at Coron and Puerto Princesa which take almost two days, if the length of your trip allows for longer transfers between islands – and you are not susceptible to sea sickness. The best time to visit Palawan is from October to May when the temperatures average around 30 degrees with very little rain. The wet season is between June and September which makes traveling around the island less accessible. 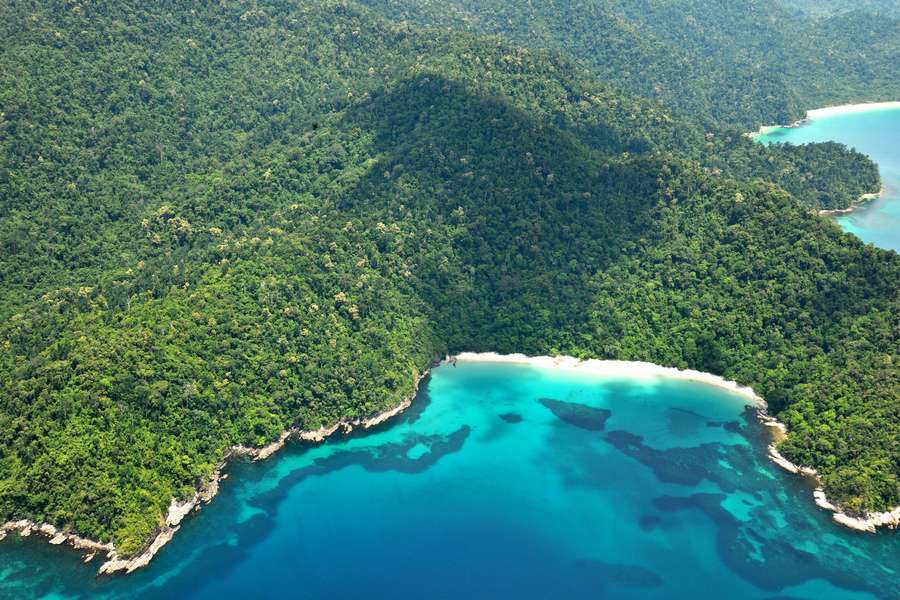 One cannot help but fall in love with Palawan. After all, when you get to experience UNESCO world heritage sites, breath-taking rainforests, beaches and the stunning natural beauty of Palawan, it is easy to see that Palawan truly is paradise on earth.