From June 13th to the 18th the 2nd annual Mister National Universe Competition, presented by HOT Magazine & Loo Chang Huat Gold Smith’s took place with Hua Hin playing host.  Khun Nopporn Vuttikul, the Mayor of Hua Hin welcomed the contestants in a video to them before they arrived.

Similar in scope and style to the more well-known female pageants, the men competed in Casual Wear, Formal Wear, Swim Wear, National Costume & Intelligence.  This international pageant for men is founded and owned by Thai entrepreneur, media personality and the creative director of this Magazine, Ms. Tanya Siri Vijitsomphong.

The men started to arrive mid-day on Wednesday the 13th with day 1 being spent getting to know one another and doing their first photo shoot. Day 1 Video

Day 2 featured a formal welcome by the staff of the InterContinental, photo shoots in swim and formal wear plus a cooking competition presided over by Theo Randall, an award-winning Chef flown in by the InterContinental for the weekend. Later there was a welcome party for everyone involved thrown by Khun Chayuta Bunyaphureesawat at her Sahwan Boutique Resort, where many of the media and organizers were staying.  Day 2 Video

Friday started early for the Misters as they awoke at 0’dark thirty to head down to the beach to give Alms to the Monks and to be blessed by them.  It was then time for breakfast, pack and checkout as they all moved over to the Holiday Inn Resort Vana Nava Hua Hin.

Once settled, everyone headed over to the Vana Nava Water Jungle for a day of water fun.

Later in the evening the men headed over to Blu Port for some more cooking and then across the street to the InterContinental Hua Hin Resort for their Friday night Beachcomber BBQ Buffet.  Several of the men commented it was the best buffet they had ever had and all were enjoying the cool vibes of the InterCon’s DJ and Sax player.  Day 3 video.

Saturday it all went to the dogs as the guys and entourage headed to Hua Hin’s Rescue Paws Dog Rescue center for a presentation on the street dog overpopulation and the work that Rescue Paws does.  Afterwards, everyone took turns washing and walking some of the adorable canines that call Rescue Paws their temporary home. 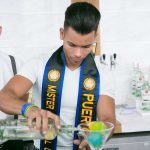 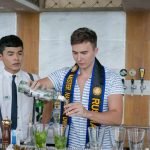 Sunday saw a little day drinking as the men met up with the Resident Mixologist & GM of Vana Nava Sky, Mr. Ron Ramirez.  Ron taught them about cocktailing and set up a competition to see who could make the best Mojito, Blue Margarita and Sangria.

From there the frivolity ended and it was all business as each contestant met up with the judges for closed door interviews.  Once the stress of the interviews passed it was time to relax and unwind as everyone headed back to Sahwan Boutique Resort for a final dinner together.

All day Monday was spent in preparation for the final night show which started at 6pm in the Ballroom of the Holiday Inn Resort Vana Nava Hua Hin.  The crowd was filled with beautiful ladies all dressed nicely for the occasion and the excitement was high.  Bangkok wine companies Nadin and Vola Twizt were the wine sponsors for the evening adding to the to the merriment of those attending. 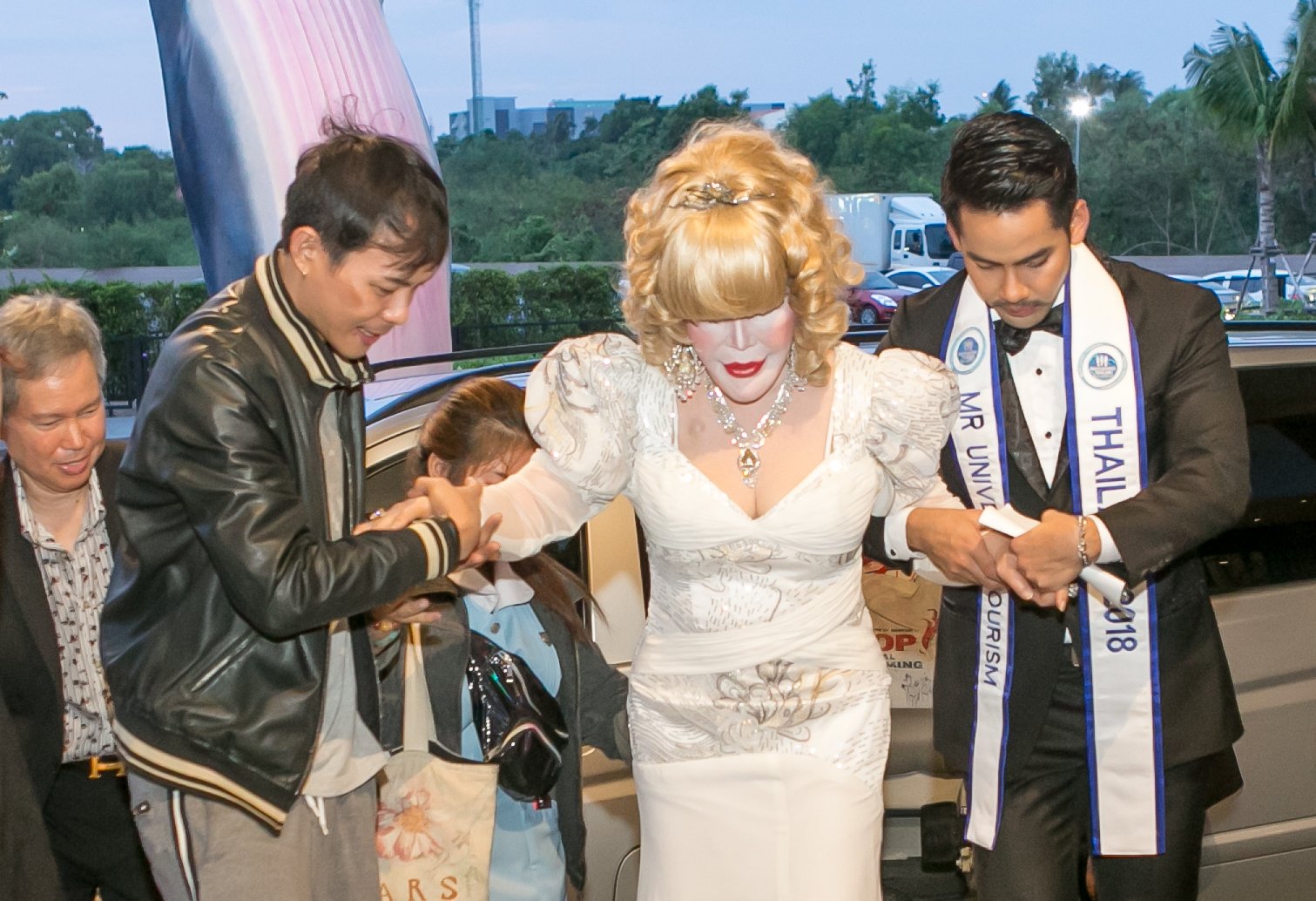 Honorary Chairwoman Khun Sumanee Guna Kasem arrived with her entourage and was ushered into a private room waiting for the dinner show to begin.  Shortly after 7pm the ballroom doors opened and people settled into their seats for dinner and the big show. 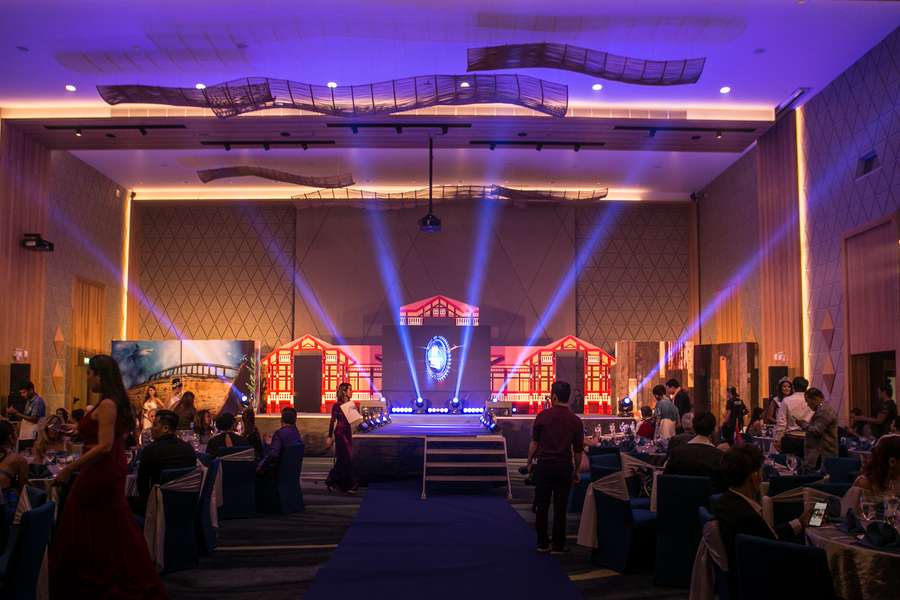 First off was the National Costume Competition and everyone had their favorites in short order.  The judges scores were tallied and Thailand was the victor.

After the speeches Miss Rebecca Pagan from The Voice Thailand came out and entertained the crowd with several songs. 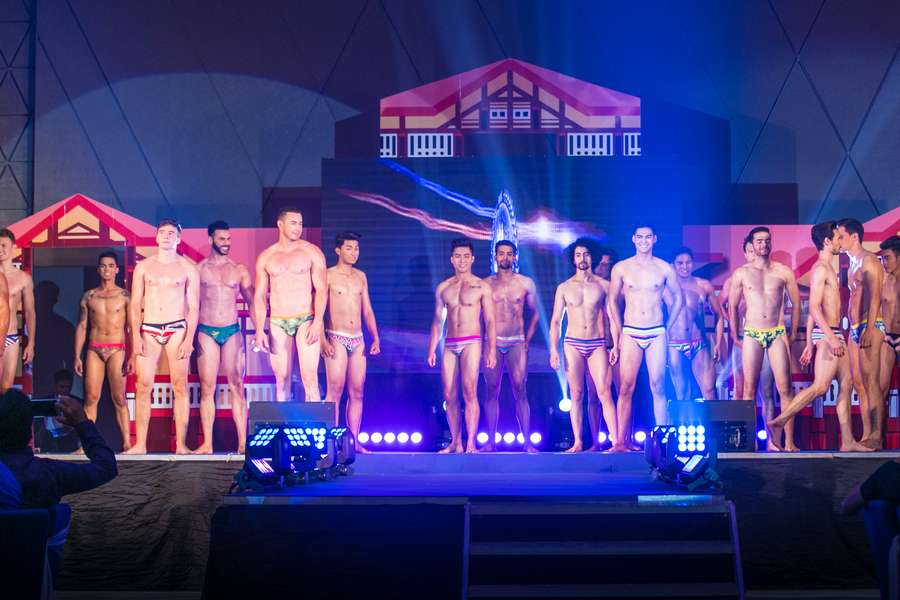 The noise decibel level in the ballroom then began to spike, caused by the ladies, as the men came out for the swimwear portion of the event for which favorites were had in short order. 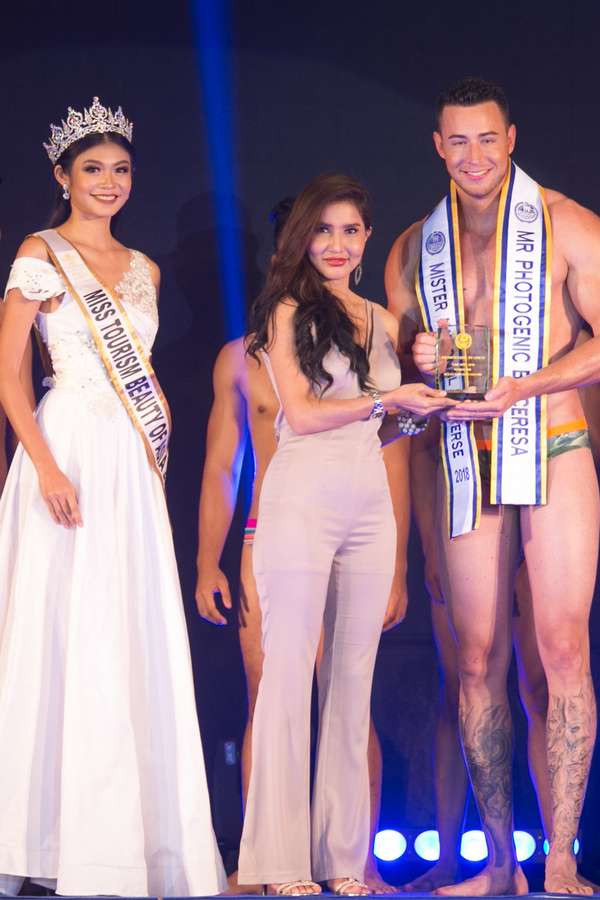 Things quieted down somewhat as the winner of the Most Photogenic Award was announced, going to Mister Switzerland, Lionel Luthi.

Next up the men came out in their formal wear and each had 60 seconds with the microphone to tell the judges and guests about themselves. 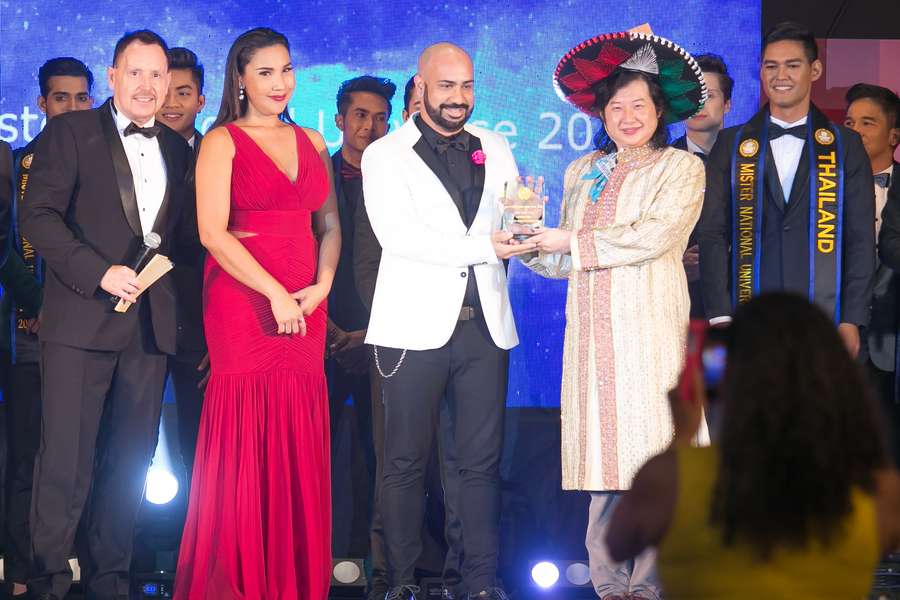 While this was taking place the judge’s scores were being tallied and it was time to announce the top 10.  Those making the cut were Indonesia, Philippines, USA, Switzerland, Puerto Rico, Nepal, India, Thailand, Malaysia & Brazil.

If you could travel back in time, who would you like to meet most and why?  What is the most beautiful thing you have given to a living person or creature? And, If you had your choice of only being one thing, handsome, rich or intelligent, which would you like to be and why? 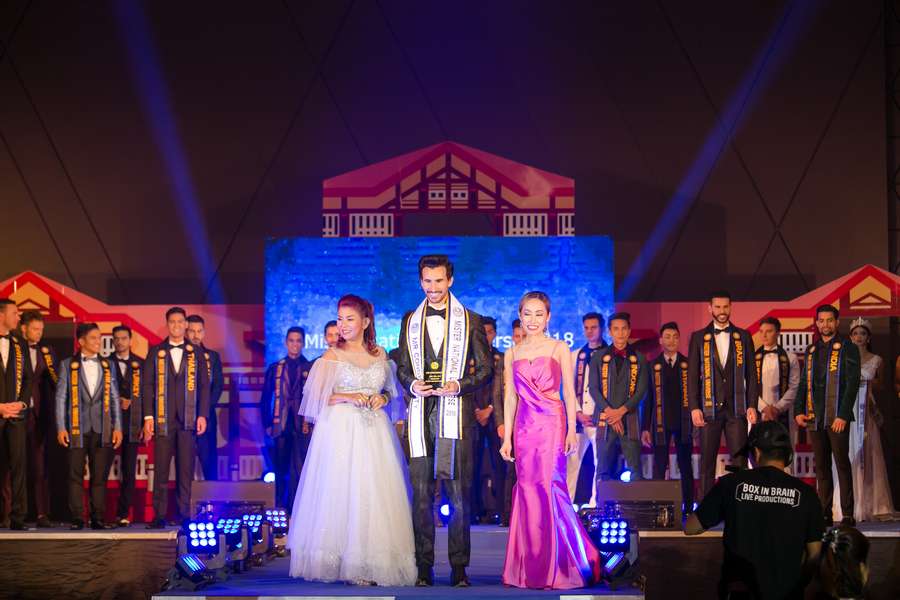 With those questions behind them, it was time to announce several more special category awards.  The Mister Congeniality Award went to David Aponte from the USA and the People’s Choice Award went to Kenley Filaca from the Philippines. 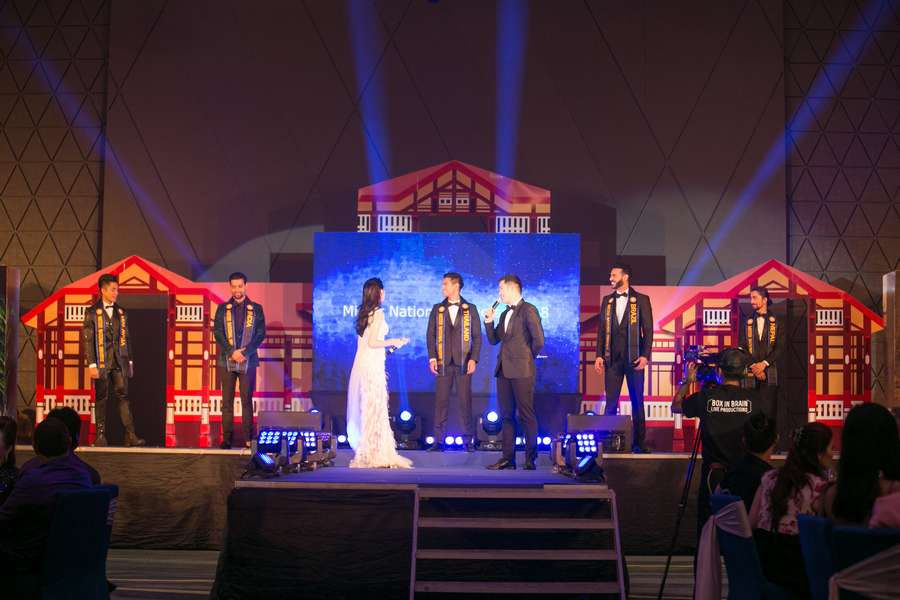 It was then time to narrow the field once again to the top 5.  With the crowd shouting out their favorites the top 5 were announced.  The top 5 were Brazil, India, Thailand, Malaysia & Nepal.

Questions were again asked of the remaining men of which several were; “What is your “core value” that you are proud of?  & If you found out that your close friend is in love with the same person as you are, what would you do and why”? 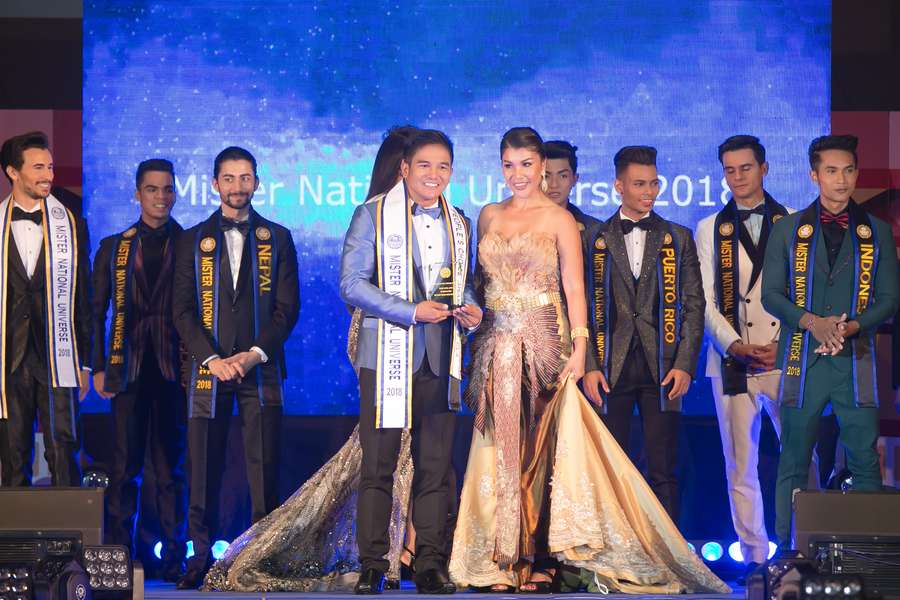 With the questions completed and while the judges were making up there minds it was time to give out the last special category award which was for Mister National Universe 2018 Ambassador.  The Award went to Kenley Filarca from the Philippines.

And then it was time.  The judges tallied scores were given to the MC’s and the winners were about to be announced. 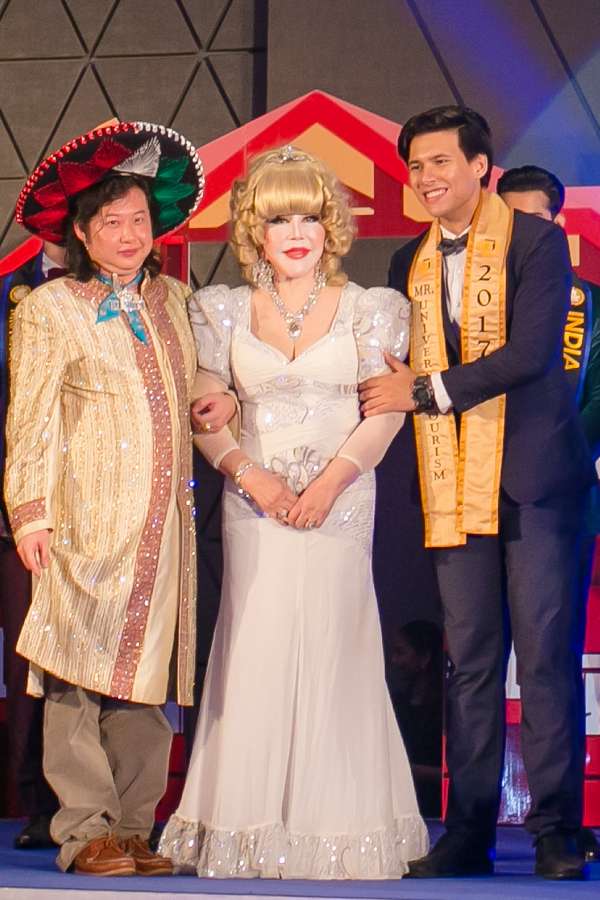 From the roar of the audience it was clear that Mister Nepal was a crowd favorite!  Khun Sumanee Guna Kasem came on stage to present him with his trophy and sash along with the other winners. 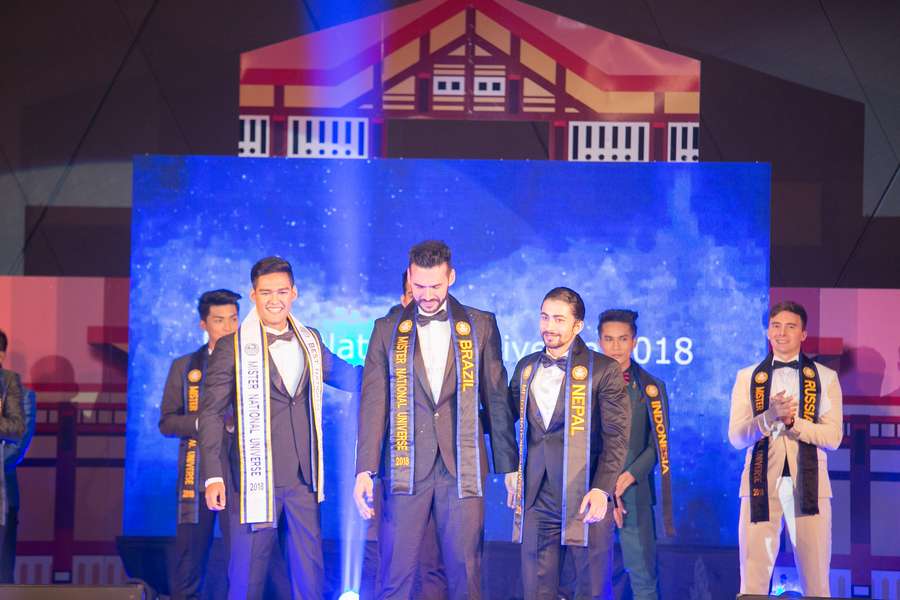 It was then picture time with all of the winners and their fans and then everyone headed upstairs to the Holiday Inn’s Vana Nava Sky Lounge for the Mister National Universe After Party.  Vana Nava Sky’s General Manager Ron Ramirez hosted everyone with hors d’oeuvres and tapas while Khun Jean Scrivener from Hua Hin’s Cheers Wine Bar provided the Wine for the joyous afterparty celebration.

Mister National Universe would like to give special thanks to our international judging panel and our hosts.

For more photos, videos and a replay of the final night broadcast go to; https://www.facebook.com/misternationaluniversethenewgenofthefuture/page