Could the Hua Hin International Jazz Festival become THE Jazz festival in SE Asia? That’s undoubtedly what leading Thai jazz musician Koh Mr. Saxman told audiences on the first night of the 2019 Hua Hin International Jazz Festival. And with an estimated 10,000 people catching the 50 diverse jazz performances over two nights and two stages, organisers can be inspired that such a bold declaration is possible. 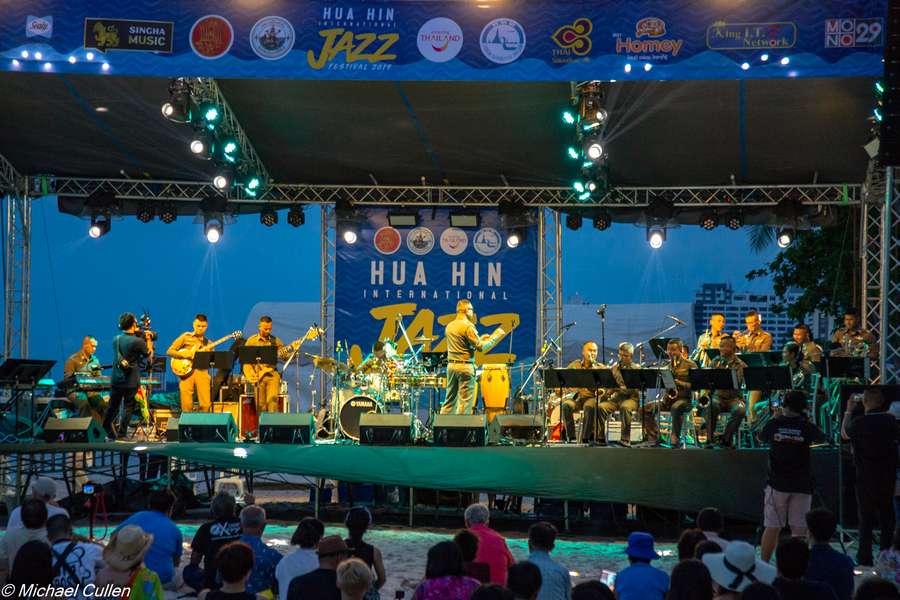 In its 15th year, 2019 festival goers experienced music ranging from Latin jazz, jazz fusion and big band jazz to R&B, reggae, and ska from a diverse array of seasoned Jazz talent. The Hua Hin International Jazz Festival is unique in that the two-day event is FREE. The fact that outstanding numbers of locals and visitors made their way to Hua Hin’s main beach over the two nights highlights how this accessibility to world-class jazz, is much appreciated. 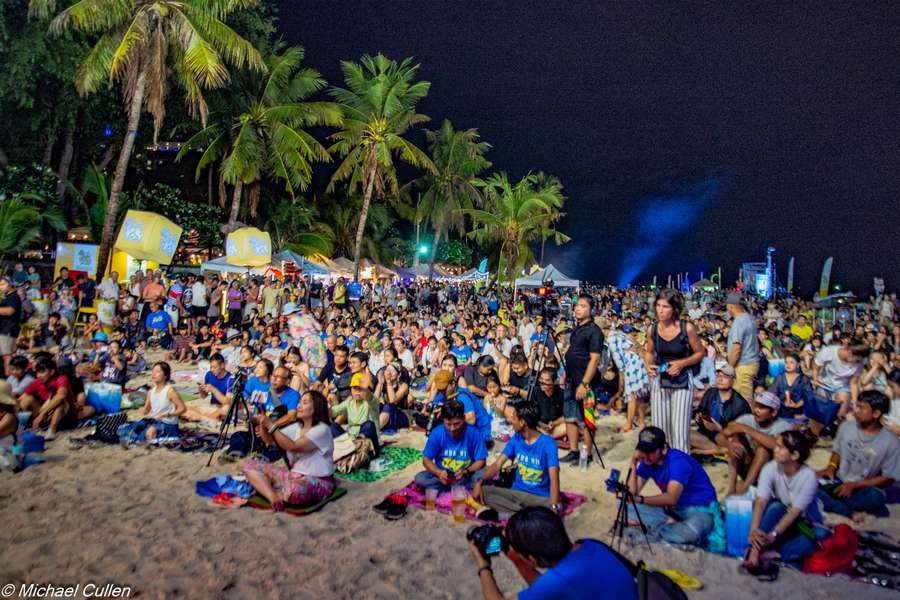 The setting, right on the beach, with the grand stage pride of place. No arranged seating stage front – simply put down your beach mat and settle in for the night. Screens spaced along the beach keep the crowd up close to what’s happening on stage. Positioned along the beach, Jazz themed art installations add to the vibe. Thai street food stalls offering all the favourites are lined up under the palm trees. An enormous open-air food court with an abundance of tables and chairs await those needing sustenance or cooling beverages as the evenings evolve. 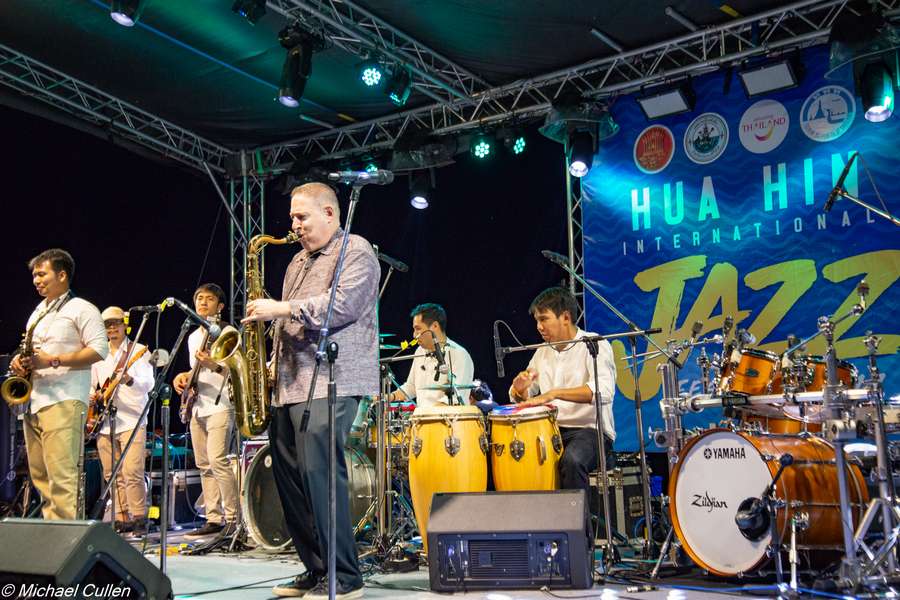 Some of the international headlines in the 2019 line-up included luminaries like Mitch Frohman (USA). Forever known as the saxophone soloist on the theme song of the hit TV show SEX & THE CITY, and one of the top saxophonist/flautists in the music scene currently. One of eight acts that took to the main stage on the first night, Mitch Frohman & The Del Rilmo band enthralling all with an inspiring performance. 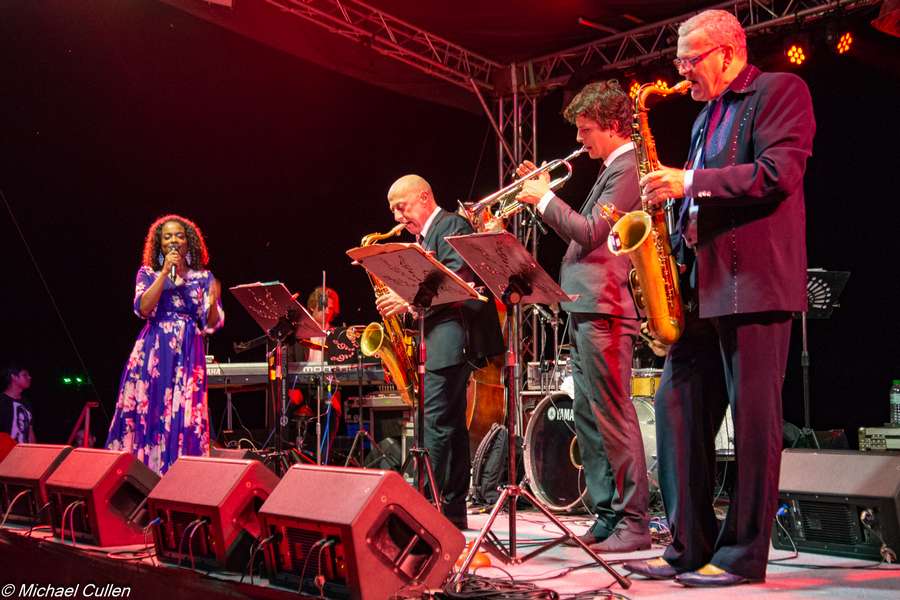 With their roots in the Netherlands, the ‘New York Round Midnight Orchestra’, featuring vocalist Izaline Callister, took the Hua Hin beach audience back to New York and Broadways renowned jazz club heyday. Three members of this group also headed up another act – the ‘Beets Brothers’ – Marius, Alexander and Peter Beets, who took to the stage on the second evening and were joined by renowned jazz vocalist from the USA, Richard Jackson for a lively set. 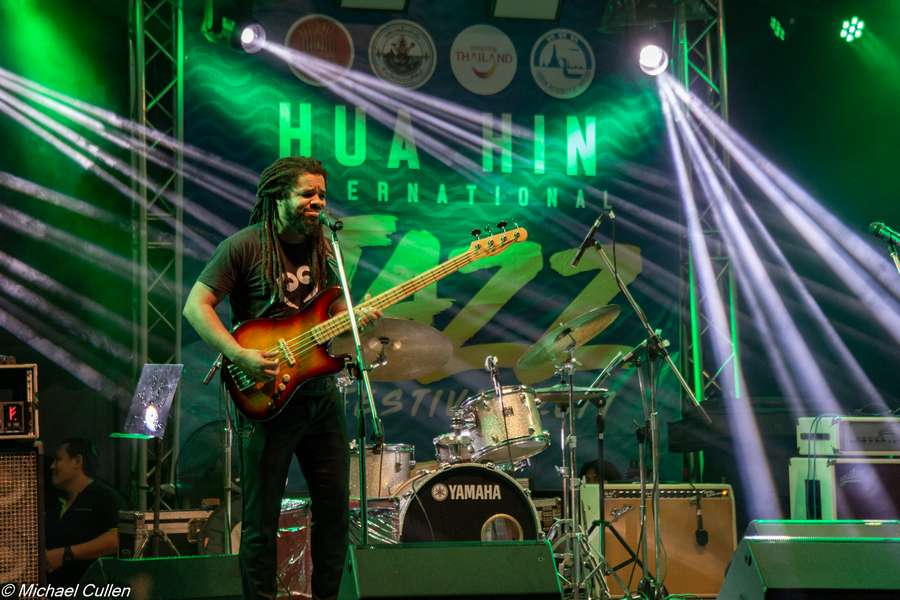 One of the world’s best jazz bassists Rubem Farias, on his first time to Hua Hin, performed several times over the week of festivities including on the main stage on Saturday evening. Rubem was joined on stage by ‘The Kings of Samba’ featuring celebrated singer, composer & guitarist Filo Machado. This ensembles infectious Brazilian jazz beats got the audience’s feet tapping and hips swaying instantly. 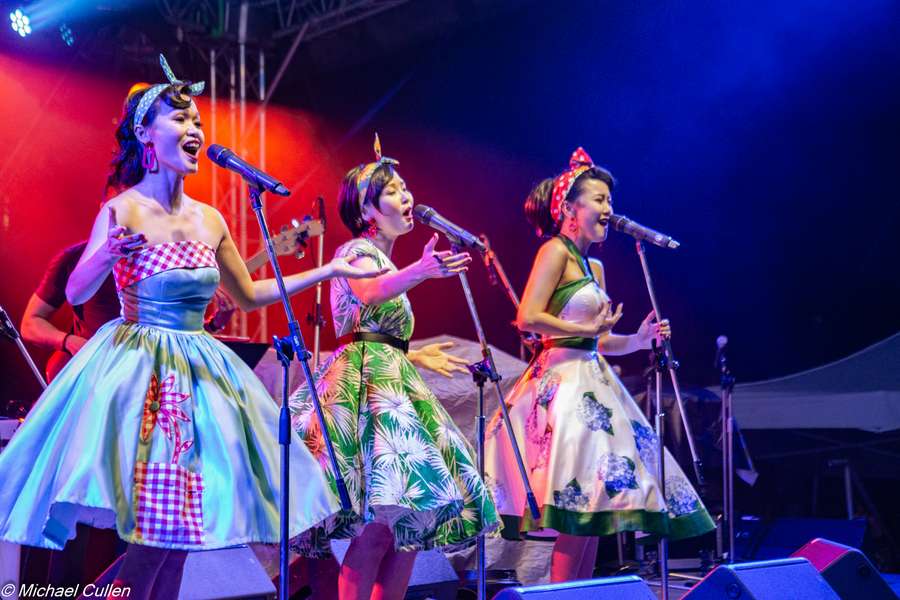 Other international newcomers to Hua Hin for 2019 included Malaysian trio ‘The Shanghai Sisters’ who brought their elegant style, infectious energy, coordinated moves, and Shanghai Jazz tunes to the stage. Performing in not one but three languages, much to the crowd’s delight.

Austrian quartet the ‘Woody Black 4’ mesmerised and enthralled the audience with their stylistic and exuberant musical playfulness. Just them and their four bass-clarinets, pure, without any other accompaniment. Coming together at university some 10 years ago, this was their first appearance in Thailand, thanks in part to assistance from the Austrian embassy. 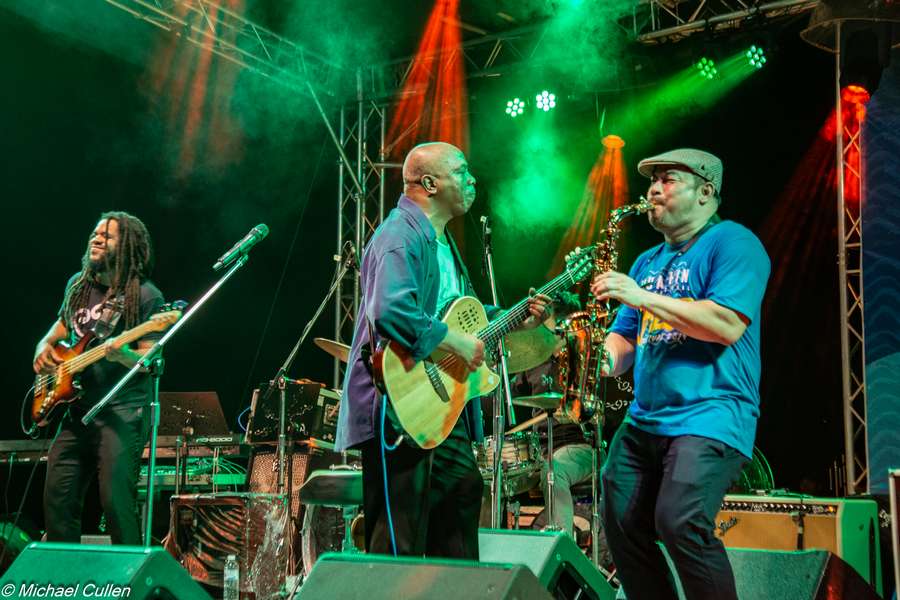 Up and coming performers had their own stage on Damnernkasem Road for the duration of the festival. The enthusiastic and highly supportive Koh Mr. Saxman dropped into this stage regularly to share jazz love. Another saxophonist captivated the Saturday afternoon audience with his skill and styling. And at the tender age of eleven years, it seems that Jazz talent and Thailand are conjoined.

In the week leading up to the two-day main event, festival organisers ensured the Jazz vibe infected all corners of Hua Hin with pop-up performances happening at BluPort and Market Village Shopping Centres, Cicada Market, and the Hua Hin Clock Tower. 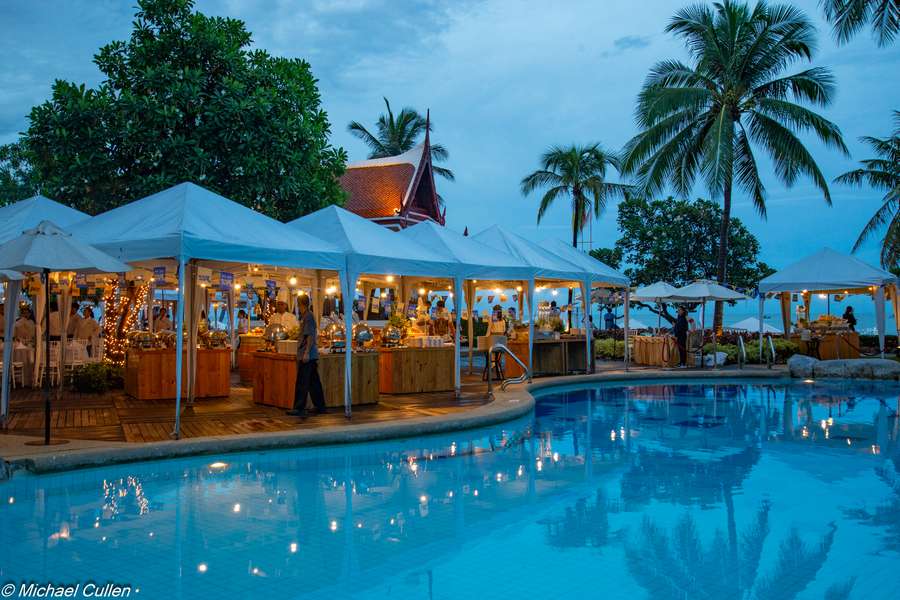 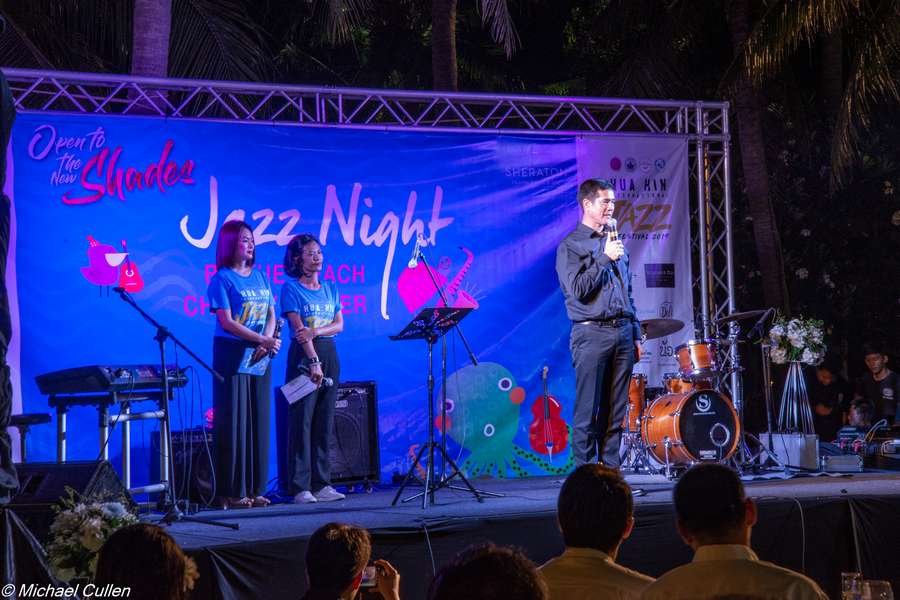 Another of the sponsors, Sheraton Hua Hin Resort, organised a charity concert on Thursday evening with several of the headline acts performing. By the end of the evening, an outstanding 100,000 THB was contributed with all proceeds going to support musical education for Wang Klai Kangwon Palace School. The Klai Kangwon school Big Band also performed at this event and were first on the main stage Friday evening kicking off the festival proper. 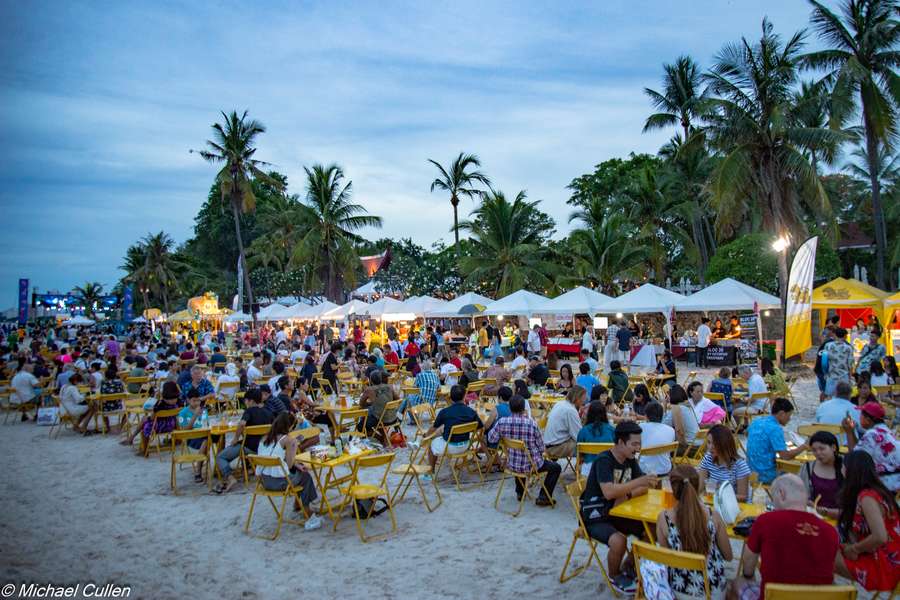 Hua Hin certainly lapped up this world-class event, so could Koh Mr. Saxman’s wish of the Hua Hin International Jazz Festival being seen as THE Jazz festival in SE Asia come to fruition? This writer certainly hopes so!