The annual River Kwai Bridge Week is set to return this year from 23rd November to 2nd December in Kanchanaburi. Paying respect to the memory of the Allied prisoners of war who built the Death Railway, the event is known for staging one of Thailand’s most spectacular light and sound shows. The event is held in conjunction with the Kanchanaburi Red Cross Fair with an aim of promoting tourism and creating greater awareness of Kanchanaburi as a destination for both domestic and international tourists. 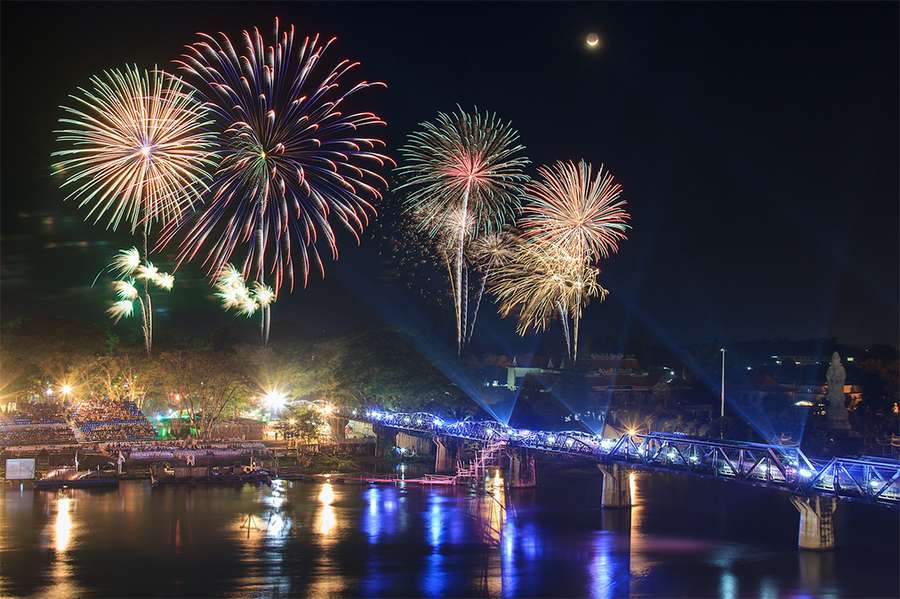 For the duration of the Second World War, Thailand was still known as Siam and, until Japan invaded Siam in December 1941, the country had been officially neutral. The invasion meant Japanese troops could – with Siam’s cooperation rather than an entirely forced hand, it has to be said – pass through the country en route to invade Malaya (modern-day Malaysia and Singapore) and Burma (now Myanmar), both British colonies. Kanchanaburi’s proximity to the British colony of Burma made it an ideal spot for Japanese forces to gather and prepare for offensives against the British. Originally called the Thailand-Burma Railway, more than 180,000 POWs and civilian laborers toiled and slaved to construct the railway, while enduring brutalization, malnutrition and terrible working conditions. It is believed more than 100,000 people died during the construction of the 415 km railway – showing precisely why it came to be known as the Death Railway. Yet whilst the bridge may be the most well-known section of the railway, it wasn’t the most arduous – the Hellfire Pass has that distinction even if it isn’t used today. Workers toiled for as many as 18 hours a day and long into the night having to cut into rock in remote hills without proper tools for the job. Yet they completed the railway ahead of schedule. 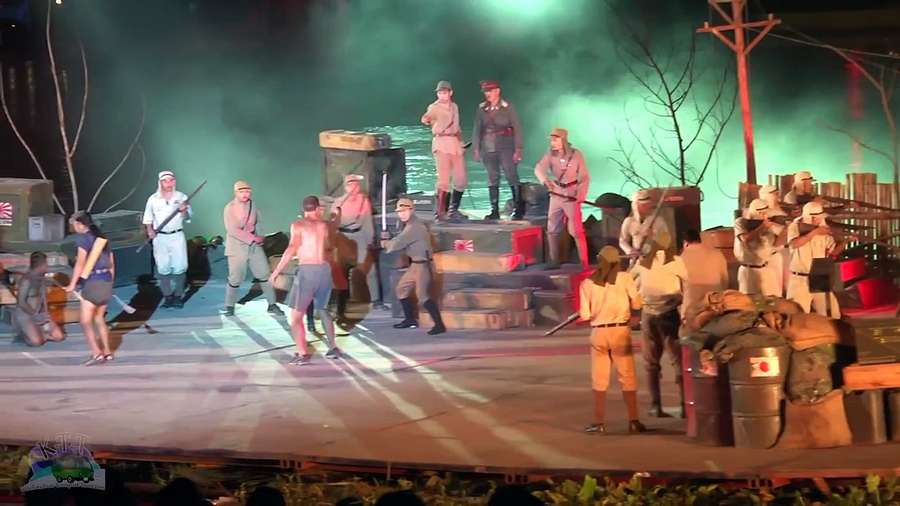 This isn’t a fairy tale – there’s no happy ending. Over one hundred thousand laborers died, all for a railway that wouldn’t survive for much longer after the war was over. The sheer loss of life was shocking. Today, this event pays respect to their memory while balancing the freedom of all who attend. Their story is told in an exciting yet poignant reconstruction through Light and Sound where the audience sees an exciting battle scene with simulated effects including life-like explosions, flying bomber planes and the most memorable of them all, trains running through fire when the bridge is first revealed. With two shows a day, a total of 1200 seats will be available per show. Tickets can be purchased before the show. Many other archeological exhibitions, folk shows, food stalls and more and a complete schedule of actives and events round out the fair. 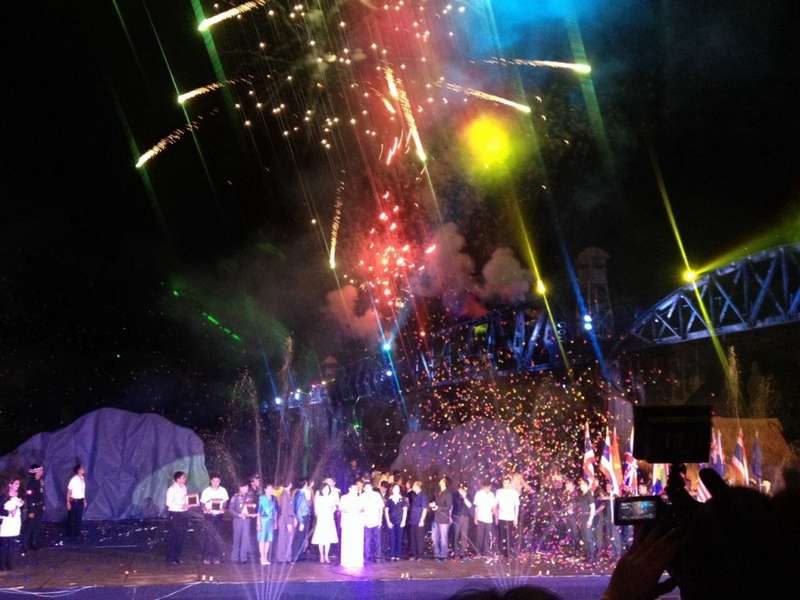 In Kanchanaburi itself, the town center’s Kanchanaburi (or Donrak) War Cemetery and, further afield, Chungkai War Cemetery – both spotlessly cared for by the Commonwealth War Graves Commission – are the places to pay respect to the fallen. Museums also offer the opportunity to learn more about the Death Railway, including the JEATH War Museum and the Thailand-Burma Railway Centre. But while you’re here, you can also visit other famous attractions including Sai Yok Noi waterfall. The waterfall is 2km from Nam Tok Sai Yok Noi station, one of the area’s war related attractions and part of the surviving railway line. 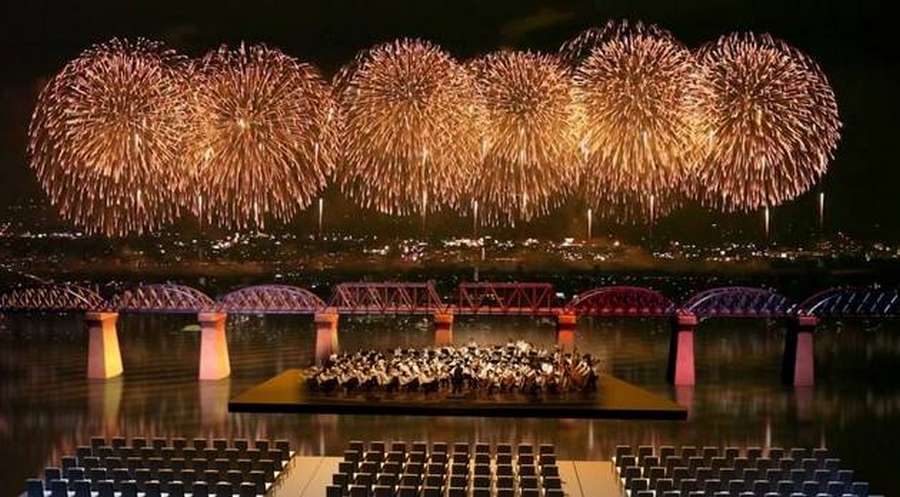 Kanchanaburi is a three hours’ drive out of Bangkok and a little longer from Hua Hin. Both history and nature lovers will love this place. It really doesn’t matter if you’re neither—Kanchanaburi is one of those hidden gems you can’t help but love. There are waterfalls (23, officially known), caves, rivers, jungle trails, national parks and a remote part known as Sangkhlaburi. This remote part of Kanchanaburi is located 200km north-west of Kanchanaburi, towards the Thai-Myanmar border. Sangkhlaburi has some amazing attractions in the jungle such as the Kratengjeng Waterfall a beautiful waterfall accessed via a heavily overgrown jungle trail. The most iconic attraction in Sangkhlaburi is the Wooden Mon Bridge which crosses Lake Vajiralongkorn, the longest of its kind in the world. Other attractions include an underwater temple, Srinakharin Dam, Vajiralongkorn Dam, Mueang Sing Historical Park, Wat Ban Tham, Wat Wang Wiwekaram, Three Pagodas Pass on Myanmar’s border, elephant sanctuaries and floating night markets and last but not the least, the Bridge on the River Kwai. 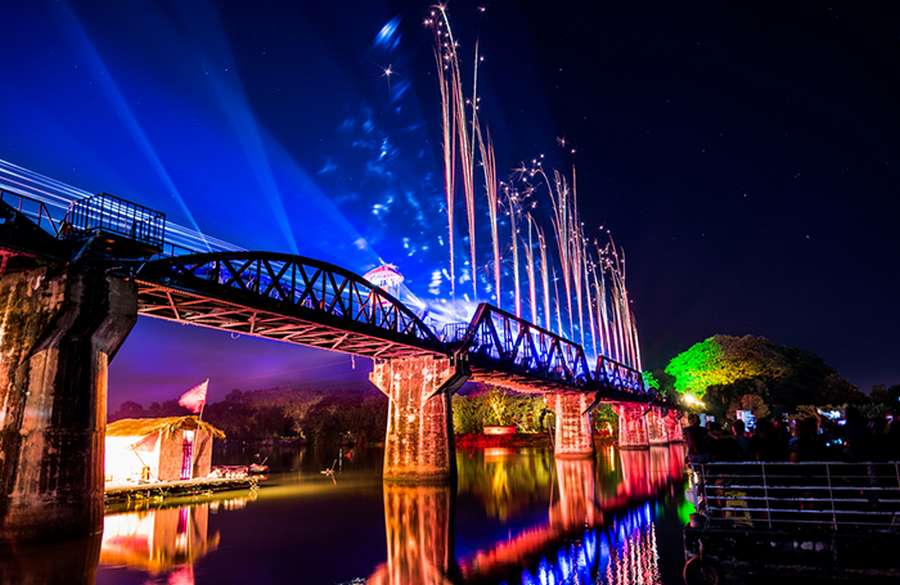 The River Kwai Bridge is one of Thailand’s more recent historical attractions. When the bridge was built, the water beneath it was actually the Mae Klong River, although it did join the Khwae Noi River elsewhere. As the bridge became famous, it was referred to using a not only incorrect but also mispronounced name, soon becoming known as the River Kwai (which means ‘Buffalo River’). To make life easier, the waterway was renamed the Khwae Yai, which at least comes closer to what tourists now know it as. The bridge that stands today is a reconstruction of the original bridge but it serves as a tribute that commemorates the sacrifice of British, American, Australian, Dutch, and New Zealand prisoners of war, in addition to many Thai, Myanmar, Chinese, Vietnamese, Malay, and Indian laborers.